For the past few weeks, I’ve been doing a lot of grilling for my theme this month. I’ve also been cooking a lot of pasta trying to put together the perfect recipe for my earlier this month, raising funds for and awareness of our local food pantry. In cooking so much over that time, it was only natural that the two would come together at some point. When they finally did, my Fideua with Chorizo and Shrimp was born. 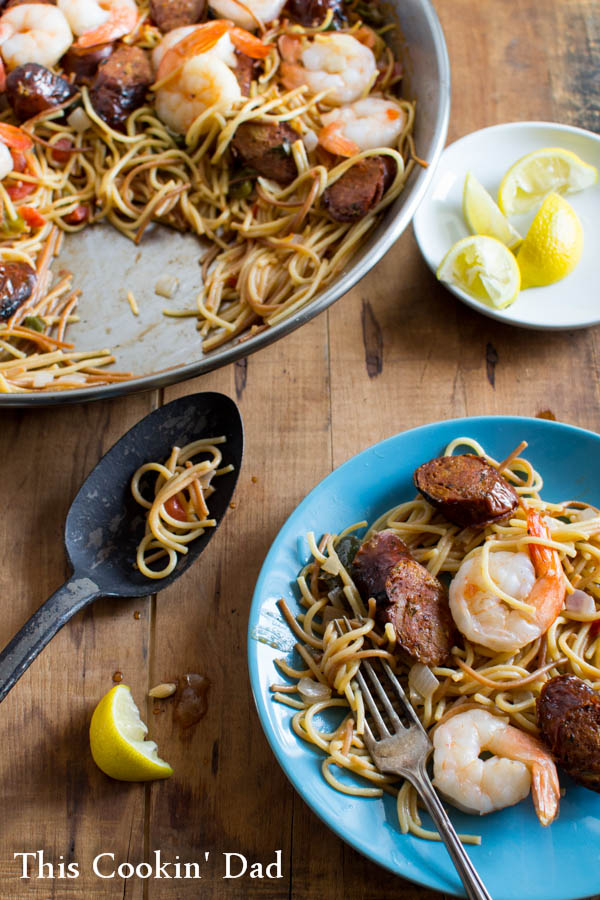 I was tasked with creating a dish using grilled meats, peppers, beer, and a few other ingredients. At least 2 dozen ideas were flitting around in my head. It can be so hard to organize your thoughts! Finally it hit me…what about doing something like paella? Except with pasta!

Surely, I thought, someone has thought of this before. I took to the web and, sure enough, not only has this been done before, it actually has a name! Fideua (pronounced “FEE day wa”) is Valencian in origin and the name comes from the Valencian word for noodle. Fideua is basically a paella made with pasta instead of rice. It is typically made with firm, white-fleshed fish and crustaceans, but every grandmother is going to have a different recipe.

My version uses chorizo, shrimp, and a little roasted poblano all cooked in beer to give a Midwestern sausage and peppers approach to this incredible Spanish dish.

I start by roasting the peppers and sausage on the grill. 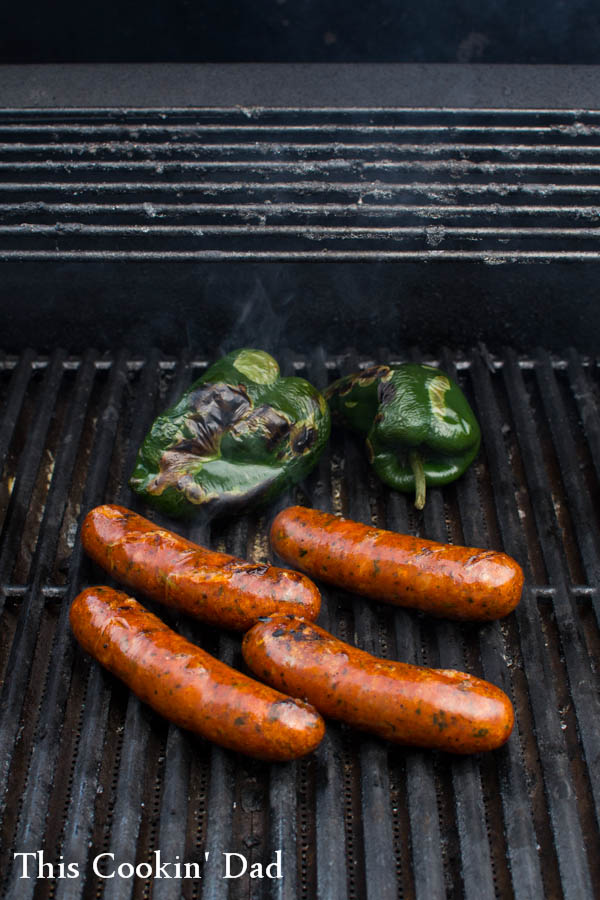 I let the peppers rest for a few minutes before removing the seeds and scraping away the charred skin. 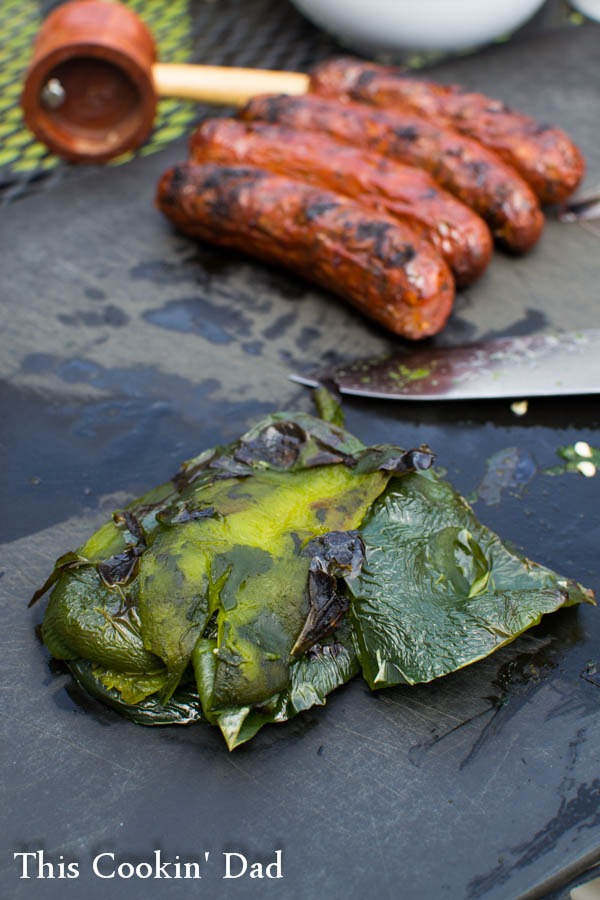 Next, I placed my paella pan on the grill, heated up some oil, and started adding broken pieces of pasta to the oil. I add some diced onion and toss the pasta, toasting for just a few minutes… 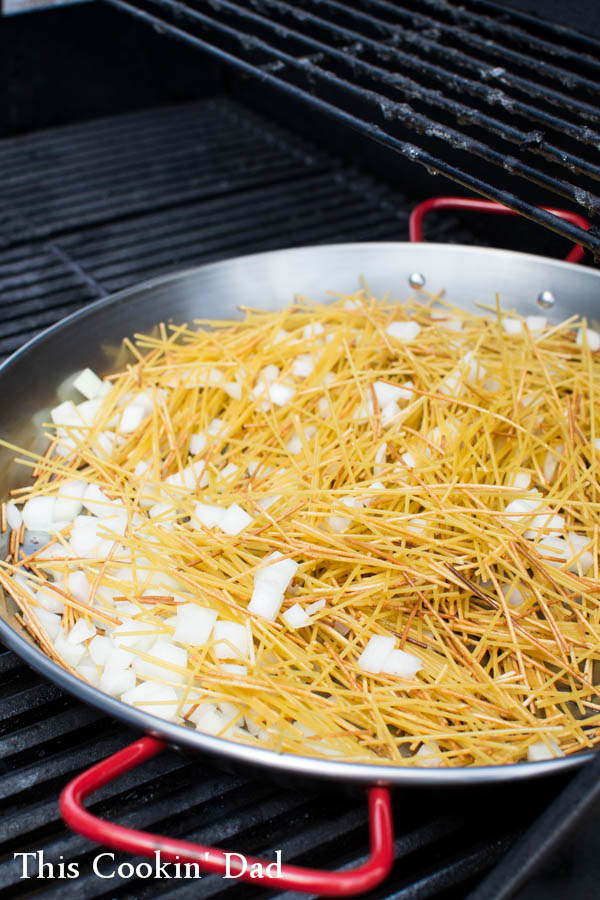 …before adding beer, water, the roasted poblano pepper, and a can of diced tomato. 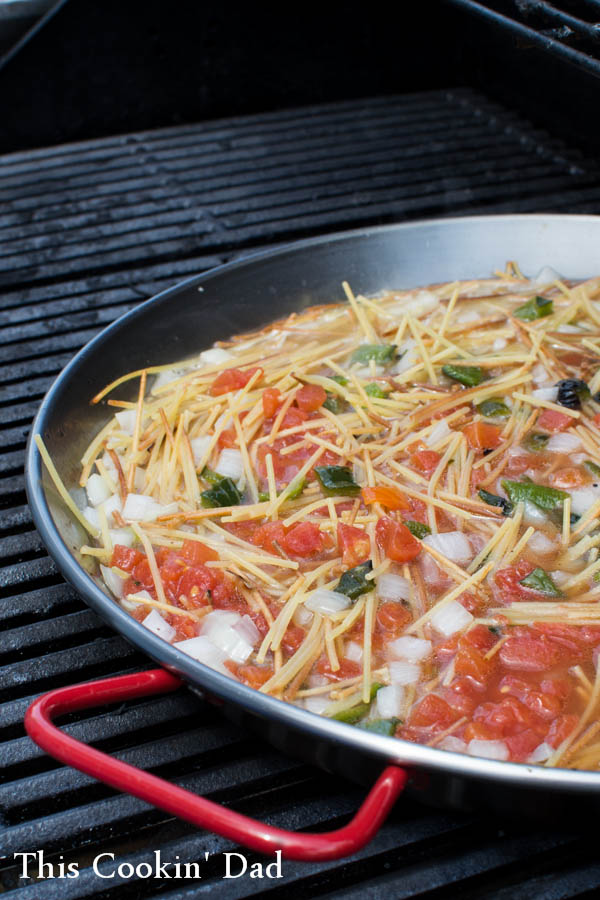 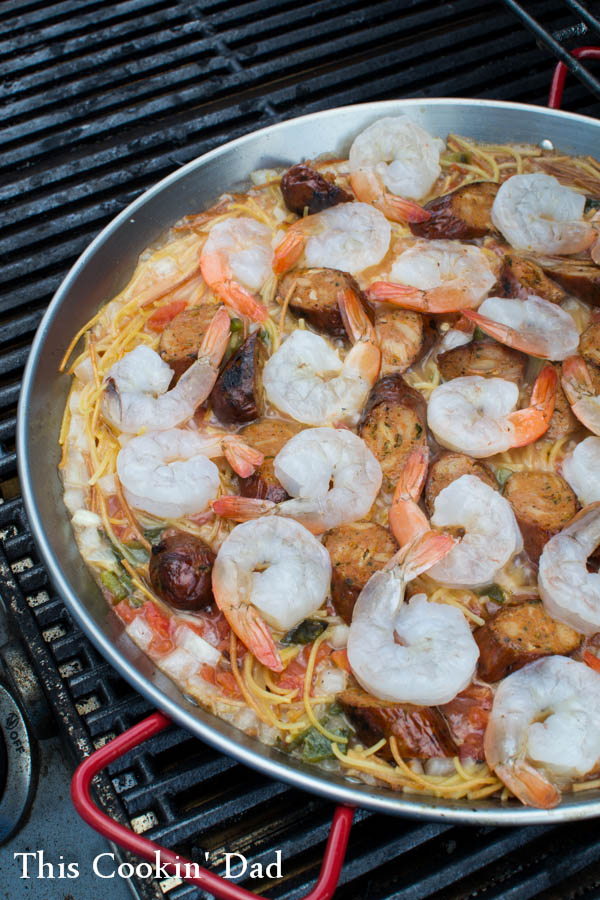 Scrape out a nice portion and serve with lemon wedges, a very traditional accompaniment to a dish like this. Enjoy!

Grilling comes in so many forms! We are grilling all month long here on This Cookin’ Dad. What are your favorite dishes to grill? Leave a comment and share your story!

Fideua with Chorizo and Shrimp 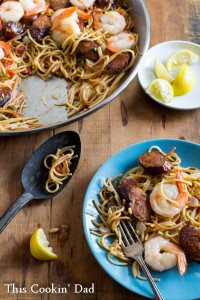 Print
Fideua is a Spanish dish similar to paella, but using broken pieces of pasta instead of rice. The shrimp is tender and works perfectly with the spicy chorizo. Cooking the pasta in beer with onions and peppers evokes memories of classic sausage, pepper, and onion sandwiches dressed up for a different crowd. A quick squeeze of lemon juice adds a touch of acid and completes the dish!
Author: Brian
Recipe type: Pasta
Cuisine: Spanish
Ingredients
Instructions
3.3.3070
It's only fair to share...