In February, I spent an entire month talking about breads. In reality, though, some of the most popular breads are viewed as celebratory breads and are pulled out just a couple of times each year. With it being St. Patrick’s Day, I wanted to take a look at Irish soda bread. I found a recipe, baked up a batch, and wound up learning far more than I thought I would. 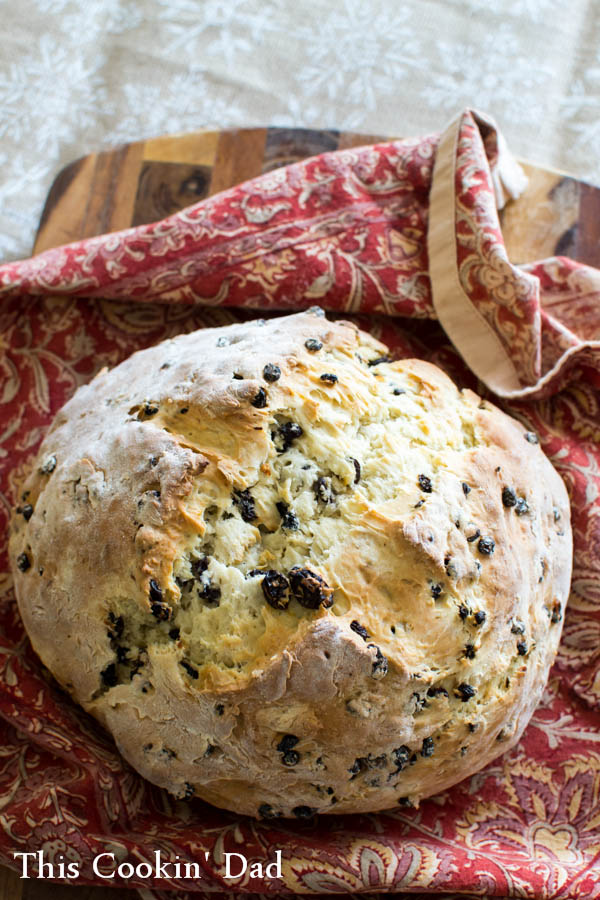 Rather than spending time trying to develop a recipe, I just wanted to focus in on the idea of Irish soda bread as we tend to think of it. So, I found a recipe online (specifically, Ina Garten’s Irish Soda Bread Recipe), prepared it, and took a photo. Of course, I got to eating it as well! However, in preparing for this post and in taking a look at the history of Irish soda bread, I found myself puzzled.

I thought that I was pretty smart knowing that it’s called “soda bread” because it employs baking soda as a leavener instead of yeast. I was interested to find out why. Poverty played a role in this, but, perhaps a larger role was the Irish insistence on using soft wheat in the breads. As it turns out, baking soda is a more effective at making soft wheat rise (hard wheat, which is more typically used in European style breads, rises better with yeast).

What puzzled me, though, was that, in the histories of Irish soda bread, I could find no mention of the raisins, currants, orange zest, etc. that we usually associate with Irish soda bread. Even eggs were considered a treat! In fact, the traditional Irish soda bread was more of an everyday bread, made up solely of flour, baking soda, buttermilk, and salt. I thought that I would at least have read about the other ingredients being added during times of celebration, but really, there was none of that.

The only time I read about other ingredients are when articles referred to an “Americanized” version of Irish soda bread. If you search through recipes, you can find caraway seeds, orange zest, currants, and raisins as pretty “normal” add-ins, but you’ll also see recipes with apples, chocolate chips, and all kind of other stuff. I imagine that some Irish, upon moving to America, were overjoyed at the abundance in their new country and added little bits here and there to their familiar breads. I can even imagine that the hard wheat here just needed a little extra help to make the bread “right.”

As a father looking to pass down his heritage, though, I can also see where the kids might have had some influence. How many kids in school had light crusty breads smeared with sweet jams? How about sweet breakfast breads? The Irish kids were just stuck, right? I think that some loving Irish mother threw in a handful of dried berries one day just to get her kids to eat and appreciate what they had. The rest just took off from there. Who wouldn’t do that for their kids, right?

I know that we do that in our house all the time. Changing my family’s seafood gumbo recipe to accommodate a seafood allergy or even adding chocolate chips to a treasured banana bread recipe. In the end, what matters more? The tradition itself or keeping that tradition alive?