Since I grew up in Louisiana, Mardi Gras holds a special place in my heart.  Unfortunately, living in Central Virginia, Mardi Gras is seen as colored beads and too much alcohol.  Many of the reasons behind the celebration are lost.  Because of that, it’s pretty hard to find a good King Cake around here.  I always think about it too late and then complain that I can’t find anything.

This year, Beth had had enough of it.  She and Simply Budgeted challenged me to make my own!  Well, challenge received!  She threw down the gauntlet and I answered.  Not only did I make a King Cake.  I made six of them!  I even colored my own sugar!  How’s that for answering a challenge?  Want to see the results?  Here goes! 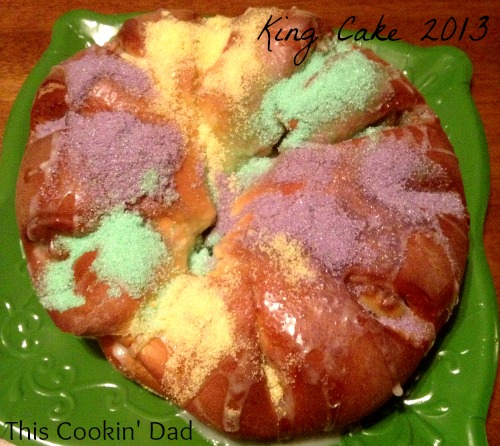 To make these beauties, I used this Mardi Gras King Cake Recipe.  To color the sugar, I just added 7 or 8 drops of food coloring to a cup of sugar.  It made more than enough for all of the cakes that I made.  What do you think?  Not bad, right?  This was one of my first ones.  They got better and better as I went along, but I wound up giving most of them away to friends in the area before I got a chance to take a picture!  I learned to stretch the roll out a little extra after rolling and before shaping it into the crown shape.

So, what does the King Cake symbolize?  Well, first of all, the King Cake is traditional during the Carnival season from Epiphany (when the three magi visited Christ 12 days after his birth) through Fat Tuesday (or Mardi Gras), the day before Lent.  The shape represents the circular route that the magi used to confuse Herod as they returned home, allowing Jesus to escape to Egypt.  The colors on top are indicative of their jeweled crowns, purple for Justice, green for Faith, and gold for Power.  A plastic baby is inserted into the cake and the person who finds it is said to have good luck all year long, and is supposed to host the Mardi Gras party the next year.

So there you have it.  Beth threw out a challenge over on Simply Budgeted where she has some in progress pictures and I think I rose to it.  What’s next??

Have you ever had a King Cake?  Have you made one?  Let me know what you think of ours and tell me about any experiences that you’ve had.