Throughout the month of May, we’re going to be talking about salads. I’ll be offering my take on a number of different salads and trying a few things that you may not see every day. First off, though, I’d like to delve a little deeper into what a salad actually is.

When you tell me that you’re going to make a salad, I instantly picture a bowl full of greens, sometimes mixed, sometimes of the iceberg variety. This will be topped with cucumbers and tomatoes for certain and may come with other toppings like red onion, shredded cheese, and overly crunchy bits of seasoned bread. This will, invariably, be drowned in ranch dressing (or Italian if you’re watching those calories).

As delightfully unappealing as that may sound, I actually like a nice garden salad with my meal from time to time. It’s not that the salad doesn’t taste good, it’s that the salad is monotonous, repetitive, and overdone. I need a little more variety. 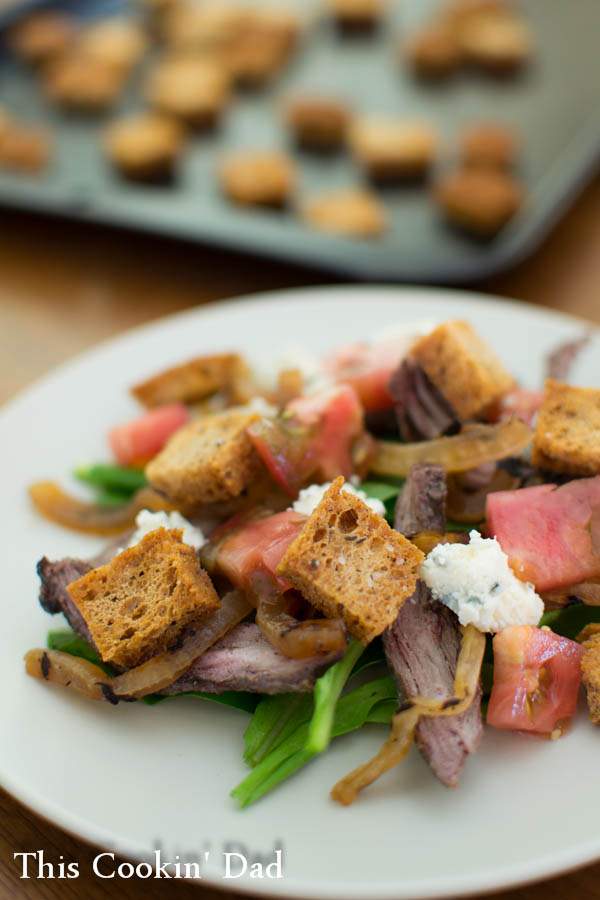 The Oxford Dictionary defines a salad as: A cold dish of various raw or cooked vegetables, usually seasoned with oil, vinegar, or other dressing and sometimes accompanied by meat, fish, or other ingredients.

In other words, salad is vegetable, meat, and sauce. The only thing that distinguishes it from any other dish is the fact that it’s cold. But what about a warm German potato salad? Or how about putting a warm ingredient on your salad? Say a poached egg or grilled chicken? Does a salad even have to be cold?

So let’s look back a bit to find out what a salad once was and what it could be.

Taking a look at The Food Timeline, it seems pretty clear that salad derives from the Latin word sal, meaning salt. Salt was a key component of salad and most of that salt was found in the dressing. We tend to think of the salad dressing as the accompaniment to the other ingredients. To me, it looks like the dressing was meant to be the main event.

This kind of turns my idea of salad upside down. If salad is about a salty dressing, then isn’t that warm German potato salad more of a salad than our “traditional” garden salad with ranch dressing? How do mayonnaise and gelatin based salads fit into this? It’s like we went from “salted mixed veggies” to “mixed veggies with dressing” to “stuff with dressing” and finally ended with “stuff with stuff”.

Over the course of the month, we’ll hit up a few of those traditional salads like a Cobb salad and that warm German potato salad. We’ll get into chicken salad, talk about bread salad, and play around with a springy rice salad. I hope you’ll join us!

All month long, we are talking about salads? What does “salad” mean to you? Did you grow up with a particular kind of salad? Leave a comment and share your story!